The oldest building on the University of Huddersfield campus and formerly the College Chapel, St Paul’s Church is now a public concert hall. Built in 1829, at the opposite end of Queen Street from St Peter’s Church, St Paul’s was designed by John Oates, architect of the original Huddersfield Infirmary, in the Early English style, ‘with plain untraceried lancets and ...thrifty application of decorative features’ (David Wyles), and built by eminent local builder and entrepreneur, Joseph Kaye. St Paul’s was one of a number of ‘Commissioners’ churches built to serve the needs of a growing population and in response to the rise of Nonconformity.

Later additions to the chancel in the 1880s reflected the changing nature of Anglican worship.

In May 1841 the Young Men's Mental Improvement Society was established by Frederic Schwann, a German merchant who coducted an export business in Huddersfield. In 1884, after merging with the Femail Educational Institute, it became the Technical School and Mechanics' Institution and moved into new premsis, now the Ramsden Building on the Queensgate campus. In 1896 it was renamed the Huddersfield Technical College, becoming the University of Huddersfield in 1992. 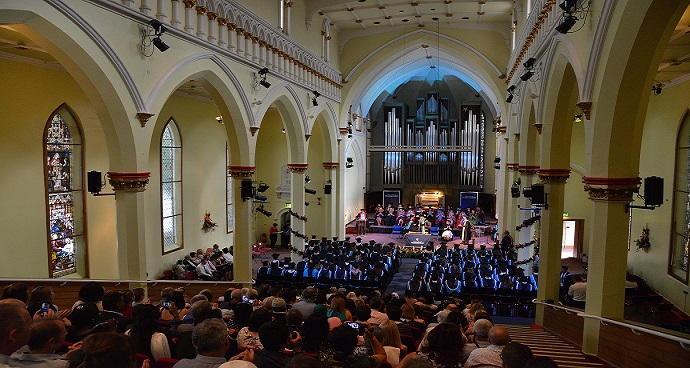 In March 1964, St Paul’s Church was dedicated as Huddersfield Technical College Chapel by the Archbishop of York, Dr Coggan. Converted from a church in 1980, the concert hall seats 400 people and now provides a venue for a range of concerts, including the world renowned Huddersfield Contemporary Music Festival, and events such as the University of Huddersfield graduation ceremonies.